“The European Commission support for the production of this site does not constitute an endorsement of the contents which reflects the views only of the authors, and the Commission cannot be held responsible for any use which may be made of the information contained therein.”

The Heroes, Castles, Legends and Learning Gamification project tested and developed innovative approaches to foreign language and technologies learning in secondary schools. We used Gamification strategies enhanced with Augmented Reality software in an international background to improve motivation and language learning in Contents and Language Integrated Learning (CLIL)/English as Second Language (ESL)/Deutsch als Fremdsprache (DaF) lessons and learning outcomes. Culture heritage awareness was improved from playing the game in national monuments, real castles symbolizing traditions and cultures. This project has been hugely enriched from the application proposal thanks to the unplanned lead of Technologies teachers and the inclusion of ELE (Spanish as Foreign Language/Español como lengua extranjera) teachers.  ETwinning plays a core role as preparation, repository and exchange platform.

More than 150 students and their families, 30 teachers and 6 secondary schools in Turkey, Italy, Greece, Poland, Malta and Spain were directly involved in this project and were the main beneficiaries.

But only school projects extends impact to many hundreds of people and organizations among the whole educational community, no matter the size of schools. From new contacts and networks among societies of preservation of castles, teacher’s associations and training companies, city councils or educational authorities like inspectors, advisors… during project meetings and study visits to share good practice and maybe future projects, to international business partnerships among some hosting families or collaboration with software developers. Erasmus+ projects for schools only are much more than dull student exchanges!

Early evaluation evidence shows increased motivation towards foreign language learning among students, better retention of vocabulary, grammar structures, and general knowledge. Awareness of EU citizenship is enhanced and students feel empowered to use English, among other languages, in real life situations. There is a general improvement of marks and behaviour in classrooms. Schools exchanged good practice on innovative learning methodologies and some are already testing gamified experiences in some subjects, mobiles/augmented reality in classrooms or CLIL teaching. But a school year is a too short span on education to detect major changes… Our former Comenius project is still delivering amazing outcomes among participants, three years later! Life/career choices among students, professional development among teachers, to mention some of the many benefits.

All of our schools share as issue the need to motivate the pupils to use English in CLIL/ESL , German in DaF and Spanish in ELE clasrooms to make them effective, and we are all looking forward new teaching approaches. A Erasmus+ project including 6 different countries and teaching/learning styles enables pedagogic observations and reflection that wouldn’t be possible in a classroom of a single country, and makes possible the development of enriched instructional resources, as well as a significant boost of language, digital and soft skills among participating students according to evaluation. 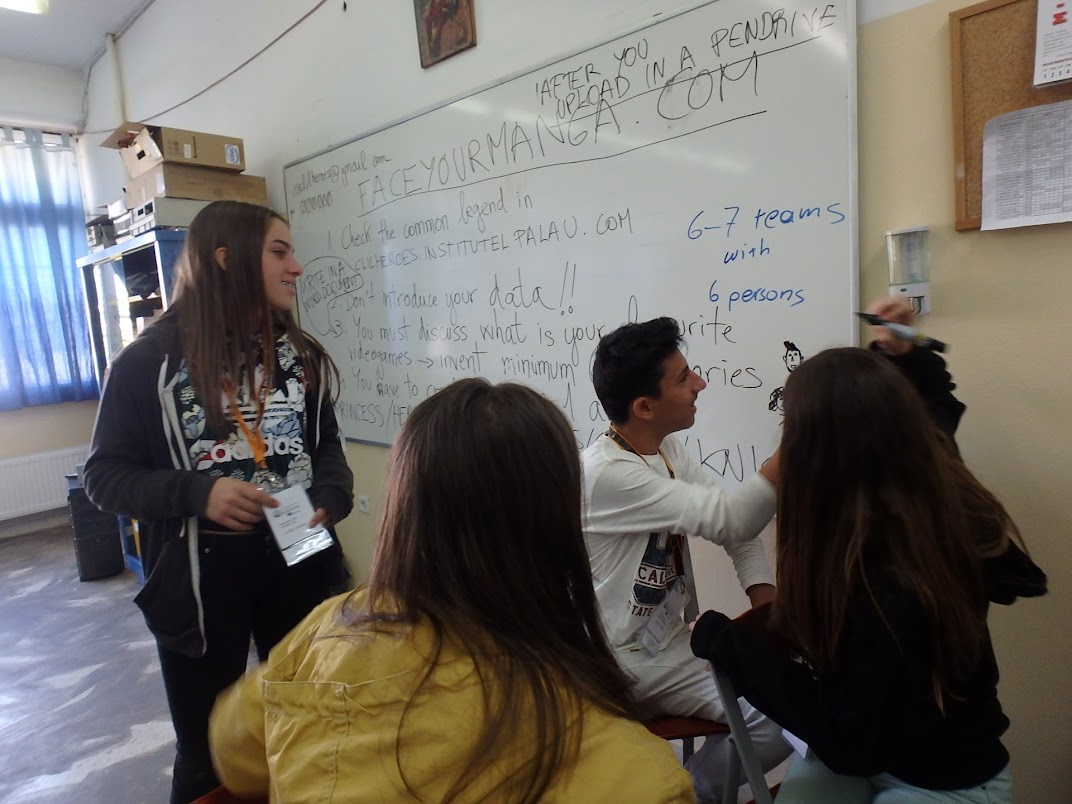 The motto of this project are the legends existing around most of the castles in Europe and the similarities they show even in very different countries, from North to South, from Baltic to Mediterranean sea. Nearly all of the legends and mythologies existing in the world are based in The Journey of the Hero pattern and archetypes, exactly the same as in most of high-end videogames. 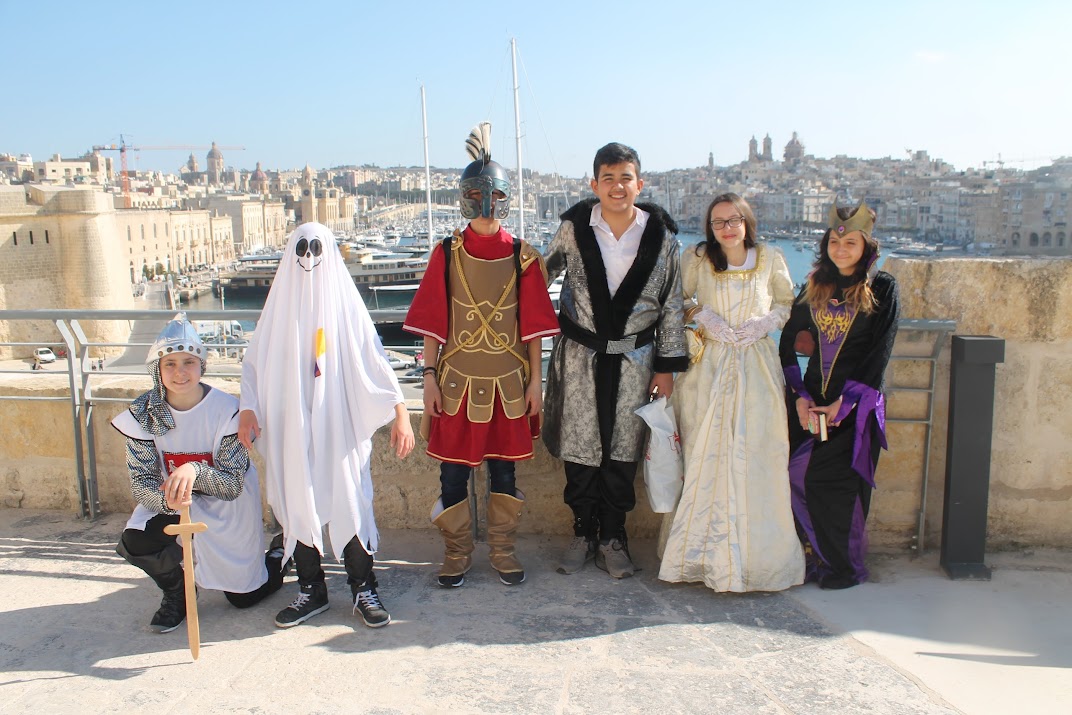 Storytelling is an essential part of any good game, and most video games strategies, tests, trials and problem-solving can be reproduced in immersive, living size games to be played in real castles.

There is conflict, there is an imaginary world, and there is international collaboration to take advantage of the best cultural features that every country has to offer. Children and teens also enjoy the chance to experience being powerful or famous through a game character

The main idea is the following: getting students integrated while teaching isn’t just a question of physical presence in the same classroom but it involves active cooperation among people. A good way to start active cooperation is looking for contact points, which may be found in the teenagers’ field of action, playing the kids’ favourite role: game, and more specifically, video games. All of them love games, many of them spend hours playing online video games in very large international teams or so-called Clans, and the slang linked to videogames or e-games is like a teen’s international new language. Why not to use all of this as English/foreign language learning enhancer?

Players/pupils provided stories to give them context as to what they are doing. The importance of learning a second language has been outlined by the students during the project as they prepared products and played the game. Challenging activities make students learn subconsciously while having entertainment and assessment/feedback was immediate: if answers are right, the game follows. According to latest research and to teachers everyday experience, positive feelings like enjoyment or fun, support better schoolwork leading to academic achievent. Emotions also play a surprisingly large role in children’s motivations for electronic game use.

Turning regular lessons into a game

The better games happen without adults interference according to pupils, and valuable lessons take place during free game, according to research. Turning our regular lessons into a game needs only some creativity, additional time and effort, understanding from our school managers, and a degree of collaboration with our pupils. Some tools as Kahoot!, Moodle or Metaverse can be helpful to develop a gamified experience.

The development of a game is a complex project, and makes a great subject for conversations and to create engaging classroom activities. Pupils are eager to share their world with understanding adults and a very special relationship with them becomes after. They love to show their expertise and to find appreciation for this matter both from teachers and from peers, and emotional links get reinforced after talking with them. This leads to a boost of motivation as they feel empowered and listened to. 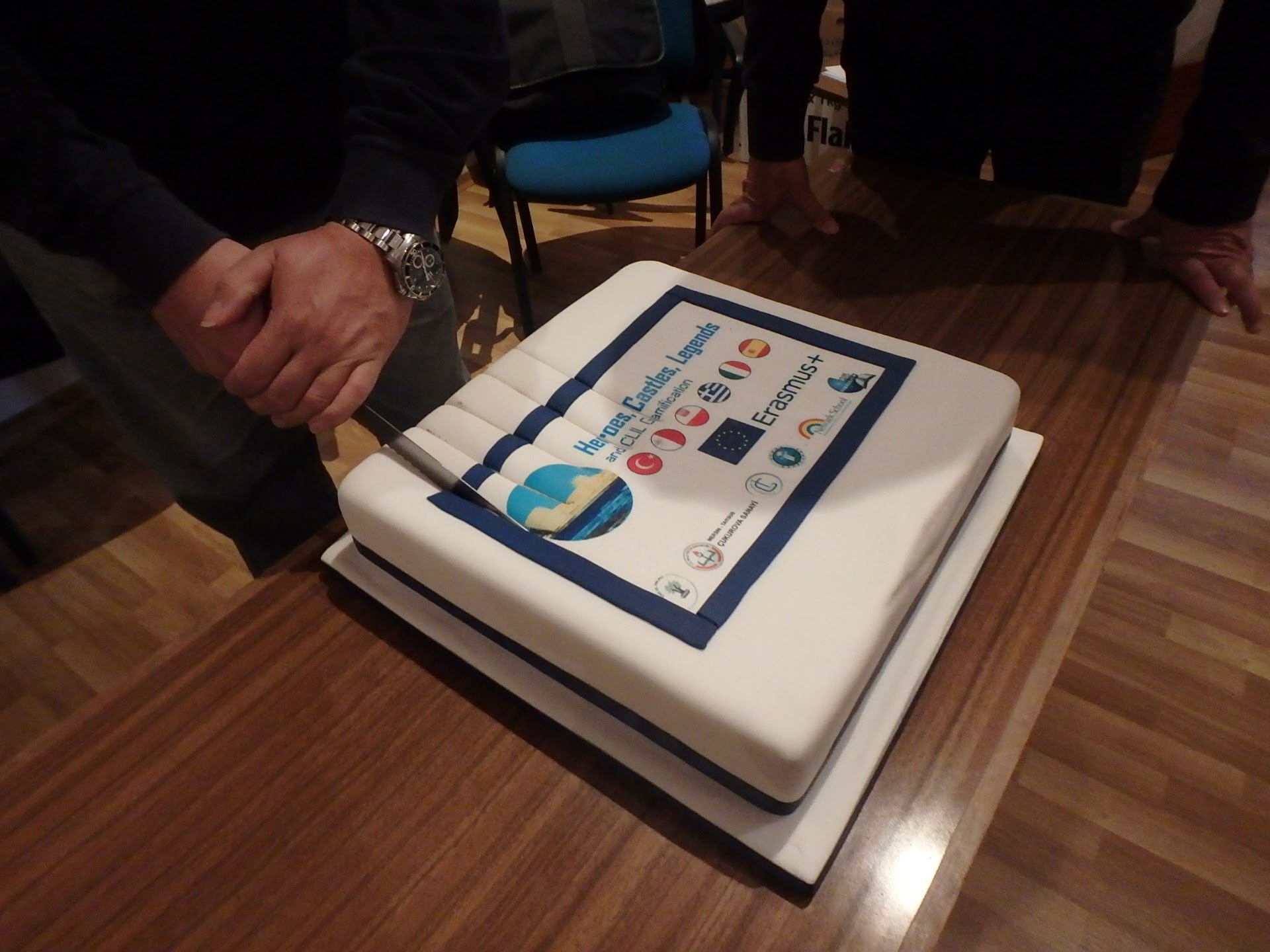 A very successful Comenius project is the first version of CLILHeroes.

The 2013-1-ES1-COM06-73497-6 Comenius 2013-15 project, The Amazing Game of the Ancient European Trails (www.agaet.com) was initially based in a Project Based Learning approach, but as the stages were following we were aware of the birth of Gamification methodology not only as sales motivator in the world of marketing, but as full strategy for the classroom, and a powerful motivator and shared interest for the students of so many different countries and backgrounds. This project was one of the very few awarde

d as example of good practice and success story.

We felt the international group of students was speaking the same language when they were chatting about their preferences in video games or even playing together in-between the learning activities and workshops, and we realized the many possibilities of gamification when linked to CLIL and EFL/DaF in the last stage of the project -the play of the game using living counters, dresses and complements in the gardens of the Royal Palace of Caserta (Italy).

We realized the importance of team building activities to scaffold and achieve the best of collaboration as well, both among the pupils atten

ding the different learning activities of the project meetings as among the international team of teachers, and videogame-like strategies would be a creative and innovative approach for teens.

It was just this last stage which has given us the idea of improving and completing the previous one: CLILHeroes aim is extending the theme of the game to the concept of didactics, helped by dramatization and mobile technology to achieve our goals. The experience of foreign language and theater teachers shows us that asking students to act in a short sketch gives far better results than simply asking them to write or doing grammar exercises, as the motivat

ing factor of their performance gives them the right inducement to accept the studying effort.

After research in the internet, we didn’t found enough evidence of the development of projects blending gamification and CLIL even in an international level, and we decided it was worth to launch a Erasmus+ project to develop the new ideas coming from the very last stage of the game. The collaboration among the EFL, CLIL and DaF teachers has been core, improved by the unplanned lead of technologies teachers and participation of ELE teachers (Español como lengua extranjera). Both the international team of teachers and the students of the AGAET project are longlife friends. It has been great to collaborate together again! And a new project might be approved soon: many good ideas and unexpected outcomes came up, encouraging us to write a new proposal.

Augmented Age of Inventions and Discoveries, the augmented version of CLILHeroes

An unplanned spinoff has been the use of Augmented Reality, leading to a new Erasmus+ KA229 project approved in 2018 call,  including a more technological approach and new partners (Holland and Finland instead of Italy and Malta). Whenever application for 2016 Erasmus+ projects was open, use of Augmented Reality was not a possibility for people without advanced coding skills, and we planned activities without IT support. Now technology is developing and promising better and easier products. Metaverse was released in the second half of the project lifespan, and EU mobile roaming was not a burden anymore, so we used mobile technology as support to solve our issues.

Mobile Augmented Reality platforms like Metaverse or Aurasma and data roaming facilities enable better interactions among teams and cultural heritage background. Only a mobile device and a data connection is needed, opposite to Virtual Reality that isolates players and requires VR glasses.

In games, films, theater and legends there are heroes and villains, clans and groups -even international at online video games- who collaborate to overcome risks and trials. Face to face collaboration is key to develop soft skills and improve learning: corrections for speaking are facilitated by students at the first instance! 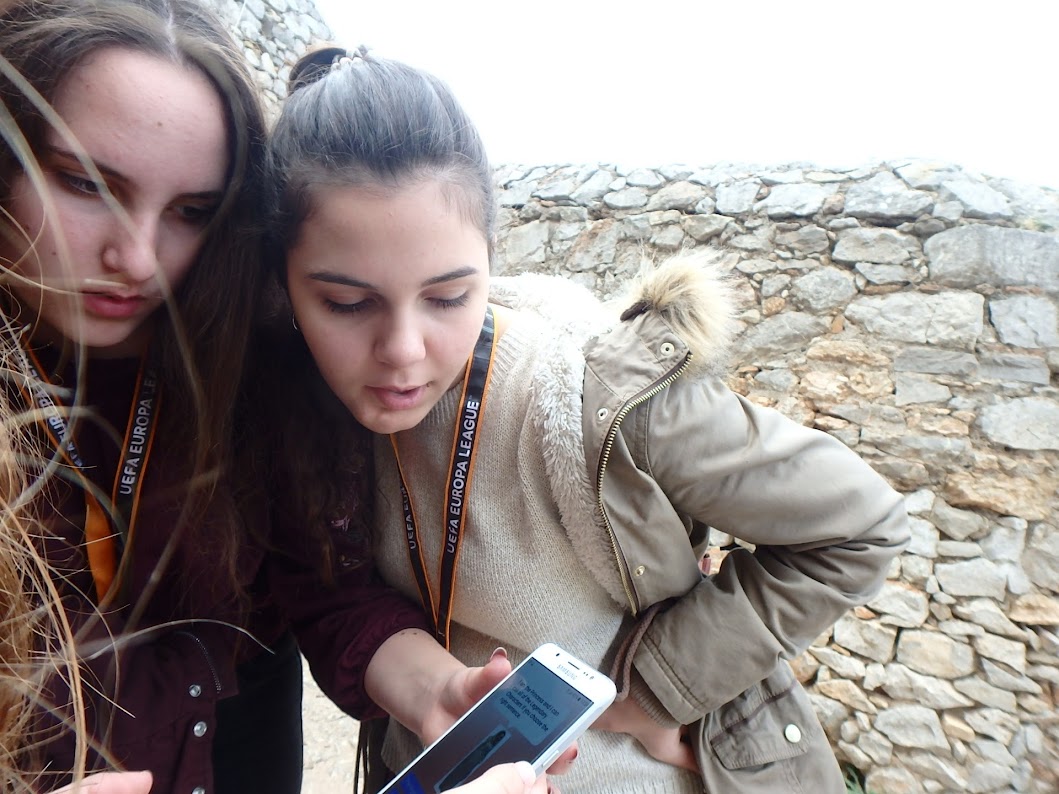 What is Augmented Reality? is an interactive experience of a real-world environment whose elements are “augmented” by computer-generated perceptual information

Another spinoff was the use of real size theatrical accessories to be found in the castles as a part of a scavenger hunt during the play of game, that will be explored by using 3D printing and coding related to foreign language learning.

Presentation of the project (please click over the image)

Erasmus+ KA2 actions are managed by the EACEA of the European Commission as part of the General call for proposals "The European Commission support for the production of this site does not constitute an endorsement of the contents which reflects the views only of the authors, and the Commission cannot be held responsible for any use which may be made of the information contained therein."

eTwinning is part of Erasmus +, the EU programme for education, training, youth and sport. Our goal is to promote and facilitate contact, exchange ideas and collaborative work between teachers and students of the countries participating in eTwinning, through ICTs.

The graphic and written contents of this website observe the Data Protection Regulation (2012/0011) of the European Commission. The participation in this project implies parental consent for the use of student's image in publications and social media related with project's activities.